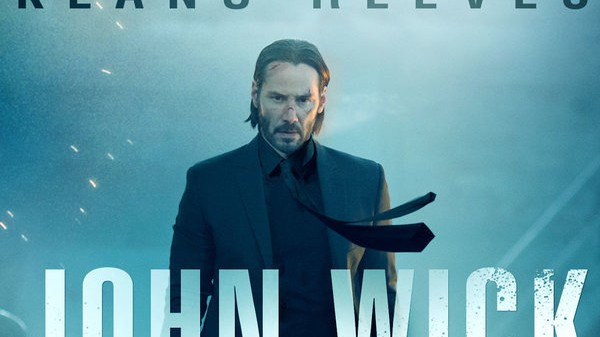 Trying my hardest to avoid Spongebob Squarepants, Cinderella and Furious 7 (I wasn’t remotely interested, I’ve seen the animated version and I haven’t seen any of the prior six), I bravely had a look at what else  my local cinema had to offer… the results, not much – but wait, what’s this? A Keanu Reeves action thriller called John Wick!

I quickly had a look at some reviews (just the star ratings, anything past that is a spoiler in my opinion, not that you should stop reading this review!) and saw promise, thus once I’d picked up my ticket from the box office I strode into the screening, carefully choosing the location of my seat (ideally central, close enough for your peripheral vision to be of use but not too close as to find yourself lost in the screen).

Starting with a flash forward of the titular John Wick crashing a car at slow speed, crawling out holding a fatal looking wound in one hand whist holding his phone in the other, watching a video of his wife.  The film then backtracks to witness the series of events that unfolds to his less-than-ideal medical condition.

With elements of non-stop fighting akin to Taken or The Raid, and surprising elements of humor found in the acknowledgments of John Wick’s prior associates (partly helped by a casual game of spot the star), John Wick finds a loving home for Keanu Reeves angry/emotionless/arse-kicking mojo that brought him glory in The Matrix…my only hope is that he gets a boost from this and can find other roles that he can be successful in.

Well written to get you rooting for the good guys (who are also pretty bad guys to be honest – but let’s not confuse the issue) and cheering on John Wick as he earns his well needed revenge to a superb soundtrack, this ground in realism piece (people don’t just collapse when you hit them over the head… or shoot them… or thrown them down stairs) was a surprise I didn’t see coming.

Would I buy it?  Possibly if it were cheap.  Would I watch it again?  Most definitely!  If you want a Friday night, gun toting and star studded action flick then this is for you.

Why not 5 out of 5?  Because I wasn’t trying to will the character to get revenge for the misdeeds done to him.  Yes I was rooting for him and I I found myself emotionally tied to characters more than once during the film, but I wasn’t swinging my fists and saying “Get him!” under my breath as the conclusion drew near.

To conclude; a welcome return from Reeves and a stunning directorial debut from Chad Stahelski.  As an original screenplay with a sequel already confirmed, I had no expectations when I saw it, but I sure as hell have high expectations for the next one!