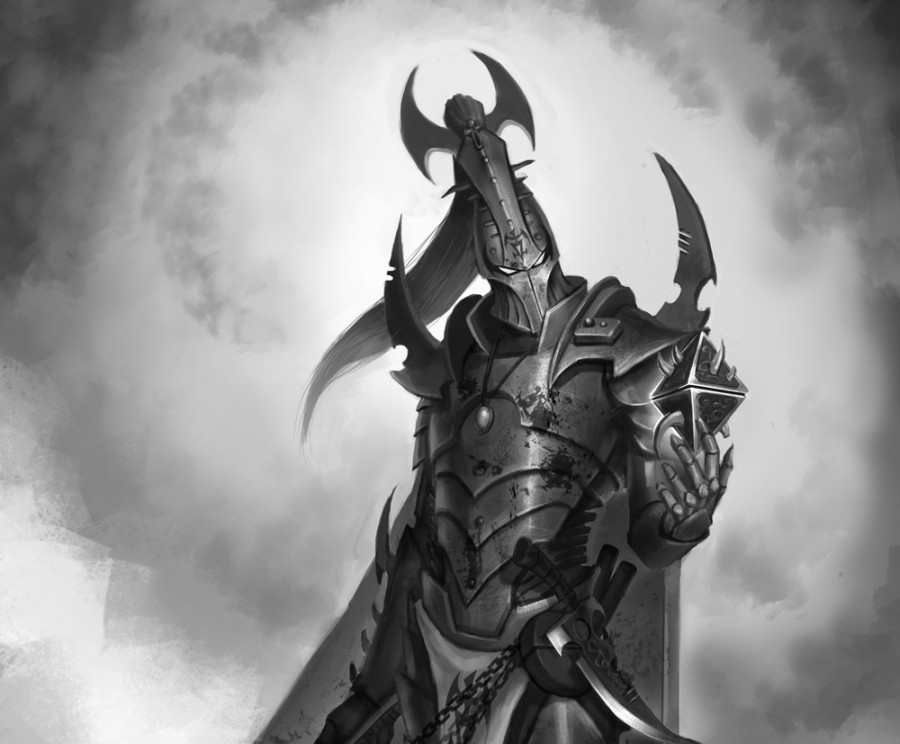 Theá was sat in his chambers, contemplating what Kalistabán had told him.

He had no reason to doubt the truth of his words and yet, it seemed too good to be true – a device that would make him practically immortal.  The fact that their naïve kin from the Craftworlds had created it simply puzzled Theá.

Since the Fall of the Eldar they had changed their ways so that they would only ever focus on one skill at a time; paths they called them.  Some would train for years as poets whilst others would learn the brutal ways of the warrior, but none that he had heard of had ever been following a path of innovation, especially a Faseer.

Eldar Faseers were the most power pyskers in the galaxy – both able to generate huge offensive bolts of energy during a battle and see into the future when not, so as to guide their diminishing race away from extinction.  They were never the ones that would tinker with things and were the last to break their Craftworld’s strict rules… Theá was starting to like this Faseer Taldier.

Kalistabán had suggested sending the entire Kabal over to deal with the Tyranid infection and claim the device through a show of arms but steering his whole fleet so close to a Tyranid Hive would be dangerous.  Whilst he wanted to show his power in the galaxy, Theá also wasn’t stupid enough to risk everything he had worked towards for a trinket – powerful as it was.

Then an idea struck him.

Turning to one of the Incubi by the door, he motioned for him to come over.

“The Wyche from the games,” Theá said to the Incubi, bringing up a recorded hologram from earlier, pointing to the one that had so captured his attention. “Find her, and bring her to me.”

Nodding in response the Incubi took a few steps backwards, turned and left the chamber, making sure not to show his back to the Archon.

As time passed Theá gathered his thoughts and refined the idea that was taking shape inside of his head.  Eventually the Incubi arrived, with the Wyche in tow.

Purposefully ignoring them a few moments longer, Theá eventually turned his head slightly and raised a hand to summon her over.  Kneeling out of her respect for her Archon, her form was even more immaculate than Theá recalled.  Her exposed skin was pale white and by the look at the rest of her toned and unscathed form, you wouldn’t have been able to tell that only hours ago she had been in a duel to the death with a dozen orcs.

Contempt that he had gaged her properly, Theá finally decided to speak to his new audience.  “Do you know why I have summoned you?”

“Hopefully Lord V’all, to applaud my display in the games earlier, however if you were unimpressed by my display I would be more than thrilled to show you another of my routines.” she replied calmly.

Whilst all Commorrites were well educated in survival techniques, both using weapons and words, it was uncommon for a simple warrior to speak more than a few short words to their Archon unless specifically asked to – another of her numerous features that Theá couldn’t place between annoyance and pleasure.

Pretending to be distracted by a train of thought, the Archon eventually broke the silence.  “What is your name?” he asked.

“Well Lilith, you are partly correct.  I have indeed summoned you because of your display.  It was most…” Theá started to make a circular motion with his hand, pretending he was trying to think of the right word to use, “pleasing.”

“I say partly for that is the reason I summoned you in particular, but not why I have summoned you.”  Pausing to revel in his riddles, Theá continued, “I have a great opportunity for you to hone your skills both as a warrior and a leader… an opportunity that must be earned, but one that is worth the risks.”

Motioning for her to stand, she did as her Archon requested and followed him to his private observation platform.

Giving her a moment to unravel what he had said, Theá looked out into the vast space that stood mere feet away from the pair.   In Commorragh they had no stars, just the red suns, slaves to their will that emitted little light but produced enough energy to power the whole city.  Leaving Commorragh in constant darkness meant that all Commorrites had an acute vision in the dark and in comparison to their skyline, even this handful of stars that Theá could now see was enough for his pupils to have to shrink to their light.

“I have a mission that I would like you to be a part of and after seeing a demonstration of your skills, I would assume you to be a perfect candidate for the team I am assembling.”

“I am honoured that you would select me my Archon.  May I enquire as to the purpose of this mission and the opportunities that it will bring?”

She was more than just a warrior, she was a diplomat too.  She knew her place in his presence and knew the boundaries to which she could push – how much she could speak without being executed… and her recent appraisal had now increased those boundaries.

“How long have you resided in my Wyche Cult?”

“I have been in the cult of The Scarred Thorns for most of my life, I could not give you a precise time as the days and nights are blurred by my training but it is well over a hundred passes.”

“And for all that time you have been a lowly Wyche.”

“I prefer for my audience and my enemies to underestimate me… it’s the surprise and fear in their eyes that I enjoy the most.”

“A simple pleasure, but one I cannot disagree with.  I have enjoyed playing with a foe many a time, only for them to realise all too late that their demise was inevitable.  I want you to join my cousin and his group to retrieve a relic for me from a less-than-desirable planet.  The opportunity will be that I will let you lead your own Wyche cult.  We are an expanding Kabal Lilith, having two Wyche cults will prove to be a most valuable asset.”

“And you’d like me to go because I’m currently expendable…but could prove my worth?”

Chuckling at the comment Theá turned to look into her bright blue eyes, likely an implant to match the colour of her long teal hair.  “Something like that…but don’t worry my dear, I do need you to come back from this alive.”